A hunting preserve can be the perfect place to bring new hunters and youngsters. The benefit of this type of hunt is that everyone is guaranteed to see game, and if your fast enough, be afforded the opportunity to get some shots. Also, hunting over dogs, makes for a much more controlled environment allowing for a better learning experience and tremendous fun.

With overcast skies on the verge of rain we drove down the long gravel driveway of the Blue Horizon Quail Preserve in Asheville, NC. My own excitement grew as I caught a glimpse of a lone pheasant scurrying through the tall, wet grasses. Having never hunted field birds, that pheasant communicated I was in for an exciting adventure. Another first for me would be hunting with a dog. A rare, red labrador retriever, Larry Darryl is a personal friend. 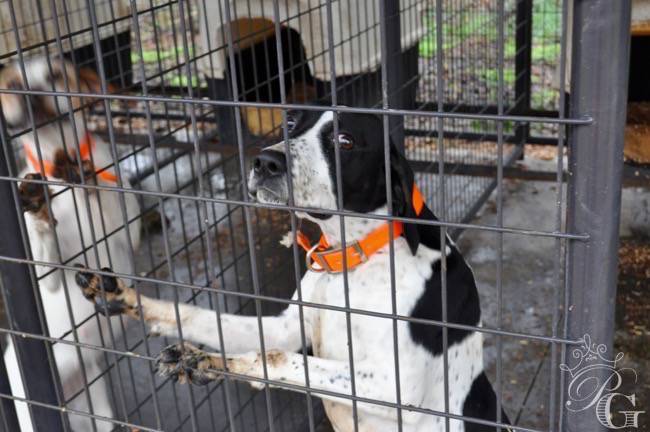 When we pulled into the lodge, we could hear the excited barks and howls of the facilities hunting dogs in their kennels. After parking I walked over to get a closer look at them and their exhilaration took over. I’d never seen hunting dogs in their environment. Crazy is the best description, as the dogs began jumping, wagging their tails and barking. Obviously they wanted to get out and go on a hunt. Certainly they were disappointed when they found out that we didn’t need their help because we had brought Larry Darryl. 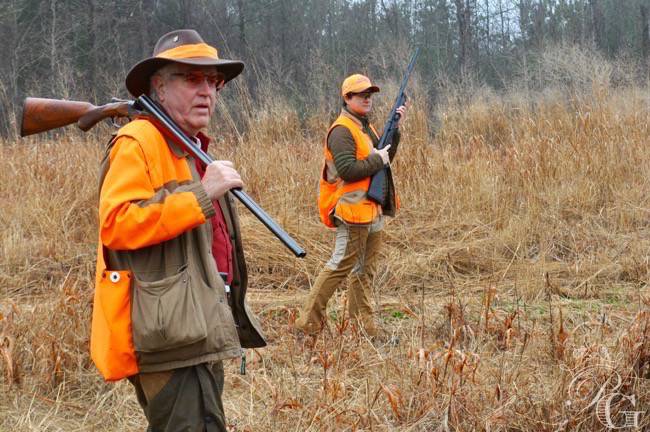 There were rules to discuss before walking the field. Hunter orange and eye protection were mandatory. Trying to keep in a straight line, shoulder to shoulder, is how we would walk. Of course everyone needs to mind where their muzzle is pointing at all times. In the excitement of a bird flushing, we would need to be careful to not shoot over or across another hunter. Also, the retriever had to be taken into consideration. To be sure the bird was far enough above Larry Darryl, no shots should be taken below the horizon. At all times, guns were to be kept on safe. Some hinge action shotguns were kept broken open if that hunter was working with the dog or taking pictures of the group. With all that taken care of, I was ready to hunt. 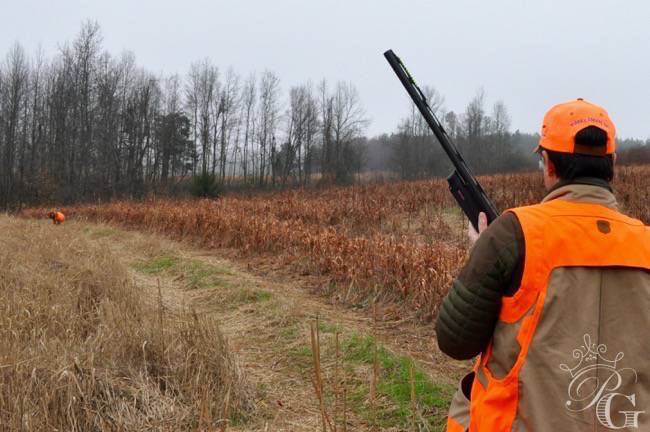 Walking the rows, I kept a watchful eye on Larry Darryl as he darted and pounced, sniffing at the air. Even hunting dogs wear hunter orange vests. Larry’s even has a reflective stripe around it, making him much more visible in the tall grasses. I intently watched Larry, waiting for him to show signs of winding a bird. His owner, Dick Jones, uses the term “winding” to describe when Larry gets the scent of the bird. After Larry’s first point and flush, It didn’t take me long to learn how to read his movements. 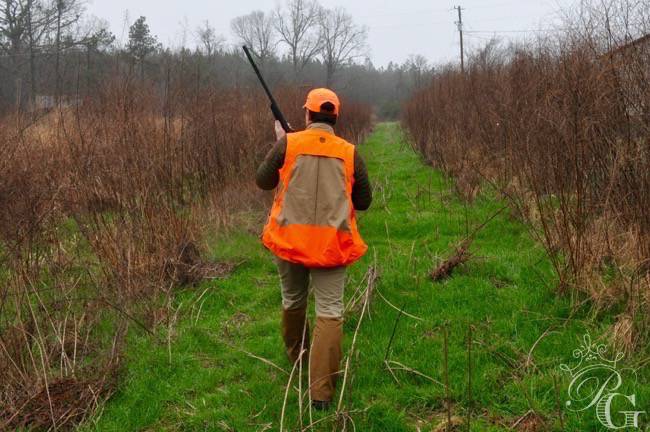 The biggest advantage of hunting with a dog is being able to walk primarily on the clear cut paths without having to stomp grasses and “beat the bushes”. Even with the dog it didn’t take me long to figure out why bird hunters wear brush pants. They sure come in handy for the times you need to walk in brush that was filled with burs and prickers. Larry, on the other hand, runs in a zig zag pattern, beating the bushes and dealing with the briars for us. When he would venture out a little too far, Dick would say, “Close. Close Larry.” and he would come back toward us. 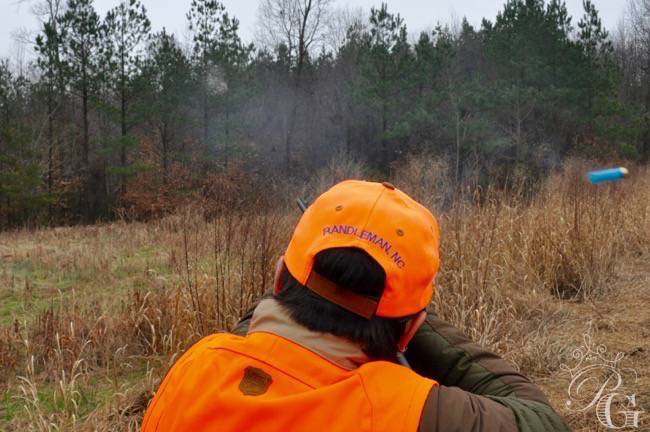 When Larry winds a bird, he circles an area, closing in as he sniffs. Once he locates the bird, he moves closer until he’s standing right over it. It’s absolutely obvious when Larry goes on point. His posture is perfectly still.  Hunters quickly move forward, getting as close to Larry as we can before the bird flushes. It’s quick to the shot as the bird flies away. It’s usually obvious who gets the first shot and who will be back up in case of a miss. 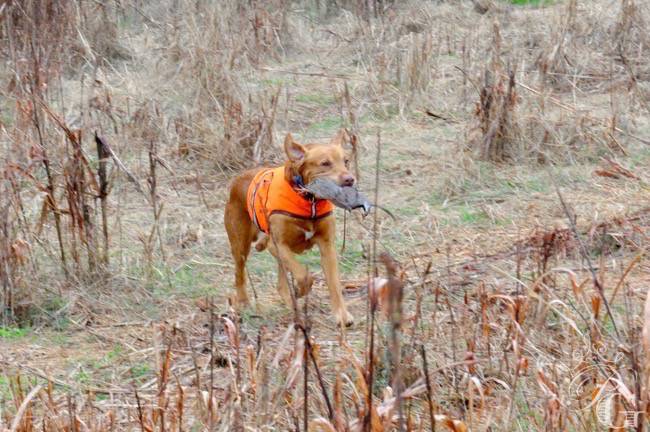 Once the gun shots are heard, Larry waits for Dick to point to the area were the bird fell and announce the command to “Fetch it!” He quickly runs in the direction Dick pointed, locates the bird and carries it to us. It’s pretty amazing how he can find those birds. Larry did a fantastic job by locating and retrieving every bird we shot. 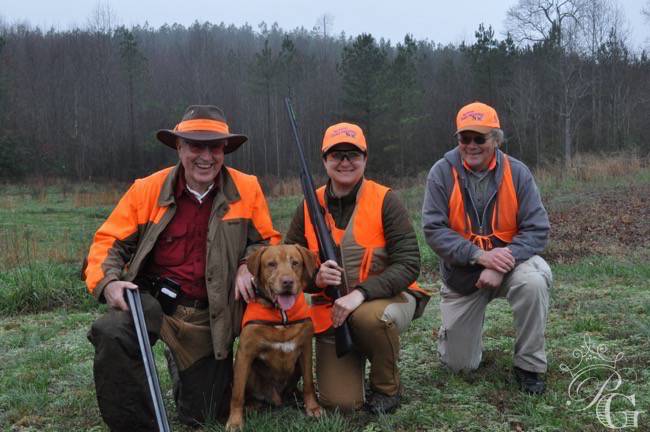 Ricky Nixon, the owner of Blue Horizons, has a beautiful piece of property. At the request of my husband, Chris, he walked with us during our entire hunt. Larry’s “daddy” Dick Jones, raised him and trained him well. Larry Darryl is a very hard working and well behaved retriever. He never stopped moving and always wanted to search a little more for another chukar. He didn’t stop until Dick finally told him we were done. Once Larry got into the van, that tired boy instantly fell sound asleep. It was pretty cute. 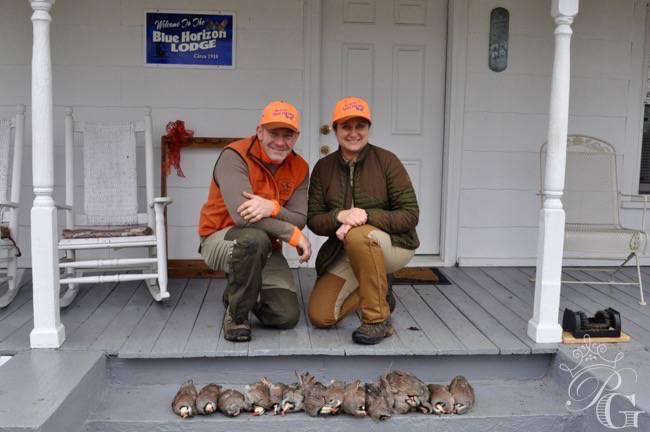 My first bird hunt was beyond successful! Only one chukar we flushed managed to get away. As tradition at the Blue Horizon Quail Preserve, there is always a photo on the front porch with the day’s bag. Chris and I gladly had our photo taken for their Facebook page. A smile was easy to conjure as this day was a real treat.  Surely a hunt I will never forget. The next time we’re in North Carolina we will come back to see Ricky for another bird hunt or maybe even pheasant tower shoot.

Have you ever gone chukar hunting?