March is Women’s History month and this year I’m bringing an unlikely person to the forefront, Eleanor Roosevelt, wife of President Franklin Delano Roosevelt. Although I’m not sure where I originally found this information, I’m super excited to finally have the opportunity to share her story. Roosevelt kept a secret regarding firearms that might surprise you. 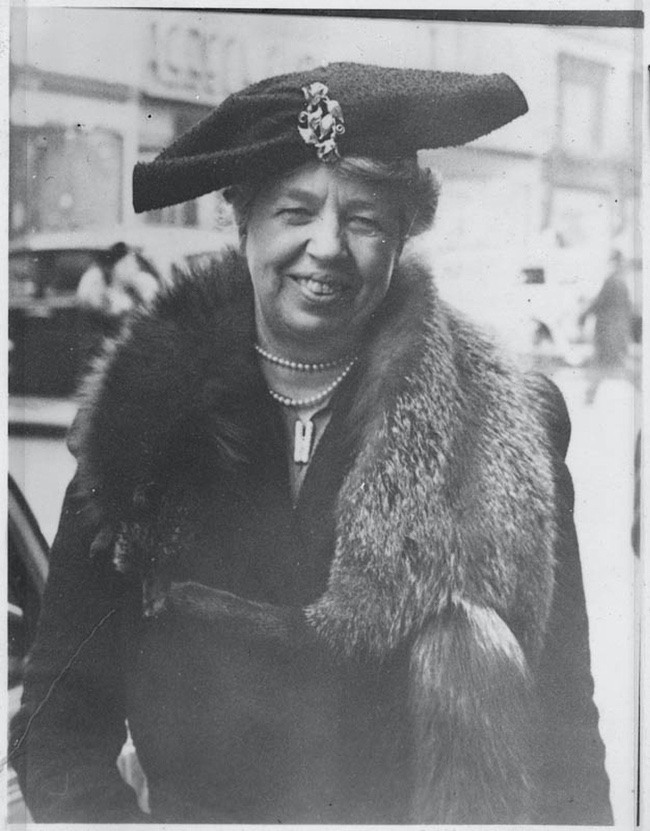 On March 4, 1933, Eleanor Roosevelt became the First Lady of the United States and occupied this position until her husband’s death on April 12, 1945. Throughout this time, she penned columns in Women’s Home Companion magazine, Ladies Home Journal and McCall’s, as well as a syndicated newspaper column. She also gave almost 1,400 speeches, had her own radio shows and published numerous books. Wow … how did she get it all done? 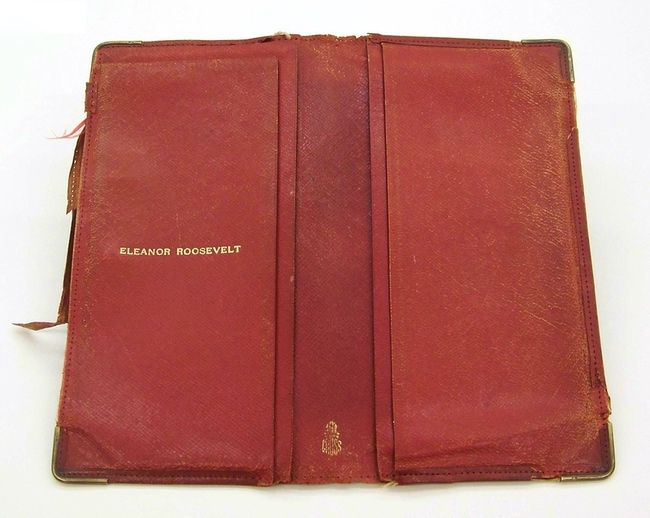 I could go on and on about all of Eleanor Roosevelt’s accomplishments and various endeavors. But what really intrigued me about this amazing women is the contents of her wallet at the time of her death.

Sure, you might expect to see some of these items in her wallet that I found on the National Archives website: a press club membership card, a membership card for the National Federation of Press Women, a Metropolitan Museum of Art membership card, credit cards, a Blue Cross insurance card, an eye bank donor card, hotel and airline courtesy cards and bits of paper containing words of inspiration or favorite poems. However, did you ever think it would contain a permit to carry a pistol, issued by Dutchess County, New York? Yep, Eleanor Roosevelt was a “Pistol Packing Mama!” 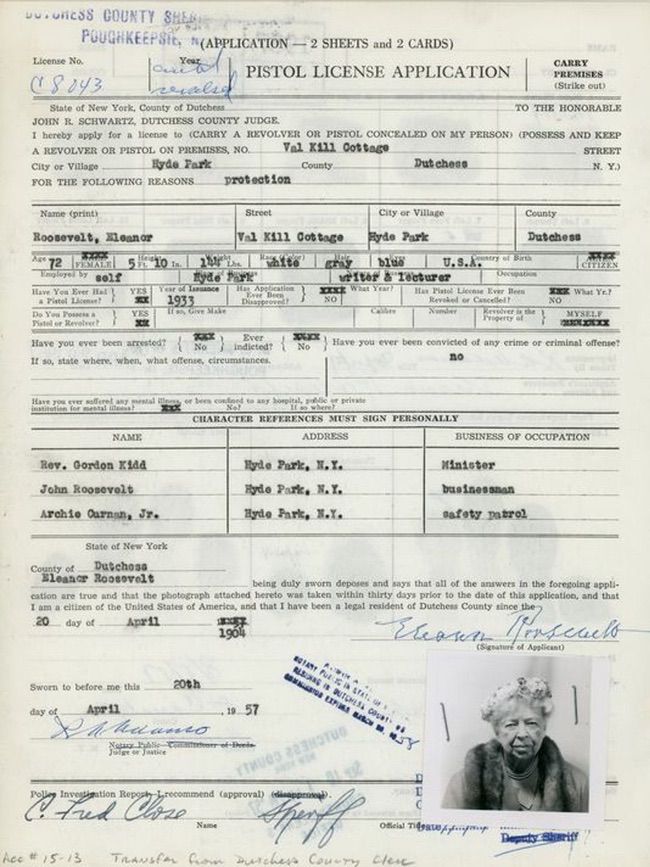 At 72 years, Eleanor received her License to Carry Pistol permit on August 5, 1957. However, through my research, I found out that she carried a pistol well before that, maybe not concealed, during her time as First Lady. 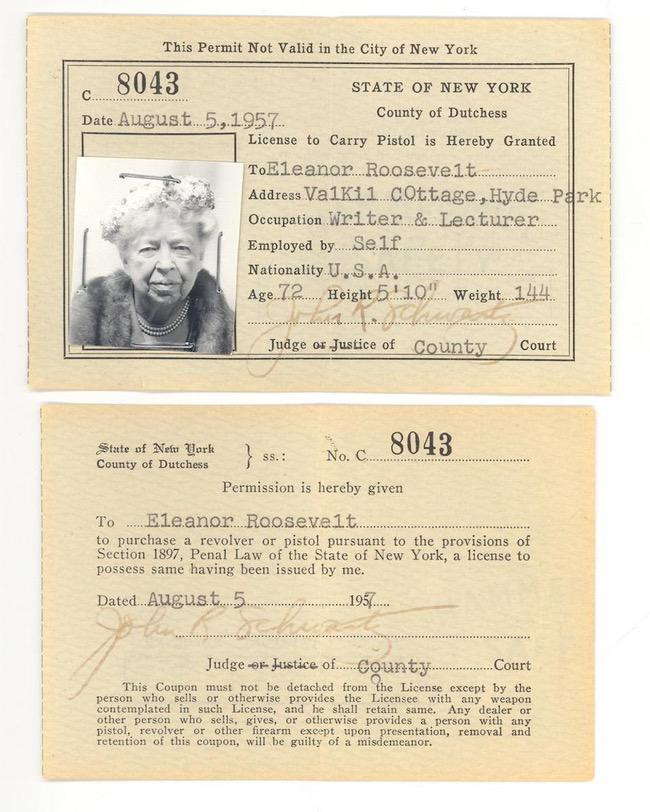 According to Eleanor’s autobiography, “After the head of the Secret Service found I was not going to allow an agent to accompany me everywhere, he went one day to Louis Howe [FDR’s secretary], plunked a revolver down on the table and said ‘Well, all right, if Mrs. Roosevelt is going to drive around the country alone, at least ask her to carry this in the car.’” 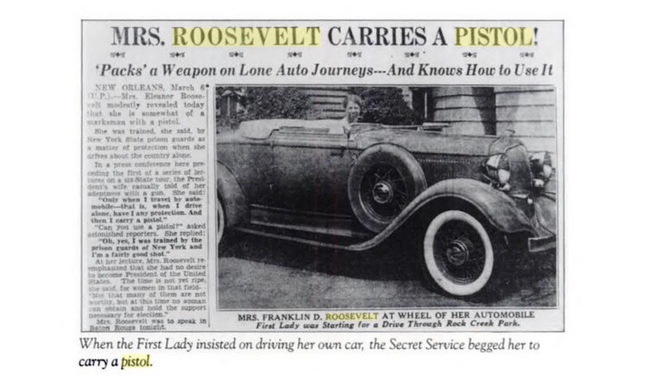 In one of her newspaper columns, she is quoted as saying, “I do not mean by this that I am an expert shot. I only wish I were. … My opportunities for shooting have been far and few between, but if the necessity arose, I do know how to use a pistol.” And as for training, upon her request, one of her husband’s former bodyguards taught her how to use the revolver she kept in the glove compartment of her automobile.

Whether Eleanor continued to carry her revolver after her time as First Lady or how often is unknown. However, according to her biographer Allida Black, “When Roosevelt defied death threats by the Ku Klux Klan to travel  to Tennessee in 1958 to attend a civil rights workshop, she and the woman who picked her up at the Nashville airport drove to the conference with ‘a loaded pistol on the front seat between them.’” 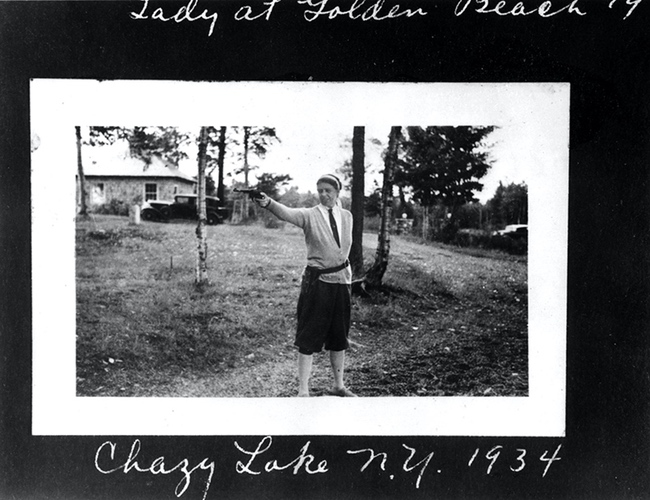 Eleanor Roosevelt died at age 78 on November 7, 1962, in New York City. Her funeral was attended by President Kennedy and former presidents Harry Truman and Dwight Eisenhower. She was buried next to her husband on the grounds of the Roosevelt estate in Hyde Park.

Eleanor Roosevelt her own first responder.

Like many women I know, Eleanor Roosevelt took safety into her own hands. She learned how to handle her gun and took lessons from a qualified instructor. Traveling without Secret Service meant the police were minutes away when the threat was seconds away. She was her own first responder.

“You gain strength, courage and confidence by every experience in which you really stop to look fear in the face. You are able to say to yourself, ‘I have lived through this horror. I can take the next thing that comes along.’ You must do the thing you think you cannot do.”

~ Eleanor Roosevelt, “You Learn by Living: Eleven Keys to a More Fulfilling Life”